How Does a Stethoscope Work?

One of the most familiar icons of modern medical care is the stethoscope.

This device makes it possible to clearly hear sounds inside the body, which can provide important information for diagnosis of disease conditions.

As familiar as it is, many people still wonder how does a stethoscope work?

The structures inside a stethoscope that makes it function are surprisingly simple, but their simplicity makes it possible for people with different levels of medical training utilize it to help patients.

Here is an explanation of how a stethoscope functions that shows how brilliant this common piece of medical equipment really is:

Components That Make Up A Stethoscope The typical stethoscope is made up of a round, flat disc that is held against the chest or other area of the body to detect sounds.

Inside this disc is a tightly stretched plastic skin called a diaphragm.

The earpieces may be rubber or molded plastic.

The molded types can be specially made to fit the individual’s ears.

So… How Does A Stethoscope Work?

Stethoscopes utilize the action of sound waves to hear what’s going on in the body.

It is the stretched diaphragm that is able to register the sound waves that internal sounds make against the patient’s skin.

When the chestpiece is held to the patient’s chest, sound waves vibrate the tightly stretched diaphragm.

The hollow acoustic tubes are thinner than the diaphragm and magnify the sound, in a process called multiple reflection.

Sound is transmitted through the tubes, bouncing along the hollow walls of the tubing to the earpieces.

The earpieces themselves do not contain a diaphragm.

Instead, the human eardrum acts as the diaphragm, vibrating to the changes in air pressure caused by the sounds.

If you press the chestpiece lightly on the body, the listener will pick up low-frequency sounds.

Pressing the chestpiece more tightly to the body, the device will pick up higher-frequency sounds.

Some types of stethoscope have a smaller diaphragm on the opposite side of the large diaphragm.

These are used to auscultate, or listen to, the sounds inside children’s bodies.

Other stethoscopes have a hollow bell on the opposite side of the large diaphragm.

These bells are pressed gently against the body to transmit the lower-toned sounds in the body.

Although health professionals have a variety of high-tech medical devices to diagnose problems inside the body, the stethoscope continues to be one of the most important pieces of equipment to immediately understand a patient’s condition.

Parts of a Stethoscope

What is a Stethoscope

How to Wear a Stethoscope

How to Clean a Stethoscope

How to Use a Stethoscope

Tags: How Does a Stethoscope Work

This site uses Akismet to reduce spam. Learn how your comment data is processed. 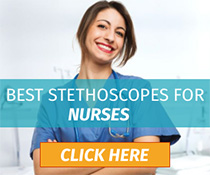 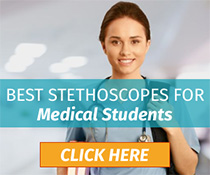